This section provides examples of usage of construction of procedural semantic zoom.

Click here to download the example map that when uploaded will generate a procedurally-generated semantic zoom. Please, note that on the highest zoom level only one compartment - cell is visible. After zoom-in, two grey areas become visible, describing functional areas in the map. After another zoom-in, nucleus and synapse compartments become visible. See also the manual for adding a project.

If during adding a new project, you check the bottom box: Split semantic zoom into separate layers, in the left panel in Overlays tab, you will see additional overlays, named Pathways and compartments-No. Each overlay is a single view of zoom level generated by semantic zoom. See image below: 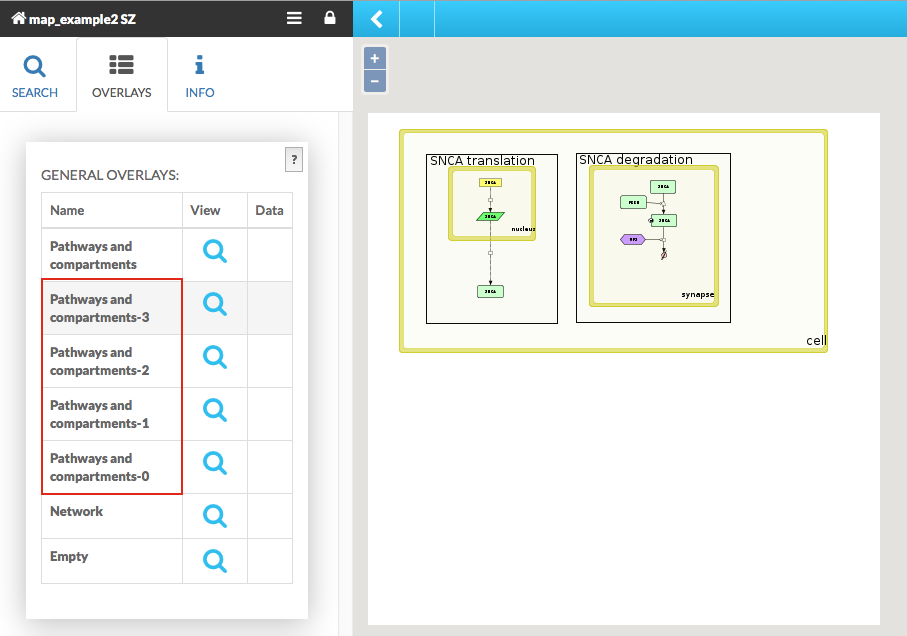 This option is used mostly for debugging of the procedural generation of the semantic zoom, and should not be used by default.

Customization of the procedural semantic zoom

In MINERVA, you can customize areas drawn in CellDesigner. By default they are grey, and the only customization that CellDesigner allows is changing of the font size and color. In MINERVA, you can change the color of the area by inserting BackgroundColor command in the name of the overlay. The first line will be treated as a name, second and later will be treated as commands. For instance, an area named:
Your area
Background:#5bb257
will have a name Your name and a color #5bb257.

Find out more about semantic zoom and how to draw the layers in CellDesigner here.

Overriding the order of appearance in the semantic zoom

In MINERVA, you can customize the order, in which the elements, interactions, compartments and areas appear in the semantic zoom.

Click here to download the map with customized semantic zoom, drawn in CellDesigner. The file has the following properties:

Note: In CellDesigner, layers (groups of areas) can be set to visible or invisible. Depending on this, the area names are displayed differently in MINERVA. See image below, on the left a map with layers set to invisible, on the right a map for which the CellDesigner file was saved with visible layers: